A Gentleman in Moscow by Amor Towles

How does one go about having a successful, purposeful life? How does one do it if possessions and space have been reduced, as well as freedom of movement beyond confinement in a large, world-class hotel denied? Those are the underlying questions of the latest book by Amor Towles, A Gentleman in Moscow. The gentleman is Count Alexander Rostov, the hotel, the Metropol, located near the Bolshoi Ballet in Moscow.

In the early 1920s, Rostov is sentenced to live out his life in the hotel, not in his luxurious suite, but in a tiny room with a pitifully small window. His crime - being of the aristocracy and the author of a controversial poem in the early 1900s. While cutting-edge in political thought at the time, post-Revolution authorities doubt Rostov's true intentions and dedication. Rather than a firing squad or Gulag, Rostov is shown leniency, allowing him to live with the threat that should he ever leave the Metropol he would be shot.

On this set of circumstances the rest of the story evolves, following the life Rostov creates for himself within the hotel for over thirty years. The Count and staff of the hotel are Damon Runyon-type characters with charm and unique quirks. The Count lives his life with order, resolve and positive attitude as well as honor and devotion. The story has subtle humor, unexpected twists and some suspense.

One can easily become wrapped up in the cocoon of the Metropol while elements of the outside world insinuate themselves into and touch that life. Criticism could and has been made that the reader needs to suspend reality from the beginning of the novel. Knowledge of the years from the Bolsheviks, through Lenin and then Stalin and into 1950s Soviet Union make Rostov's sentence incredible. As an aristocrat he would have been shot. His poem is a flimsy protection that could not have survived thirty years without re-evaluation by those in power. Towles draws in elements of political dangers for some characters. However, the full horror of Stalin's rule, as well as the devastation of WWII are not in the forefront. The seismic needle of events in Russian history of this period seems barely to move in the more metronomic life of Count Rostov.

Nevertheless, the story is charming, entertaining and philosophic as we see Rostov's life evolve and answer the questions asked at the beginning of this review. I think this was the author's intent, rather than write a gripping, sweeping narrative of the glories and tragedies of Mother Russia. Instead, Towles is paying attention to what really matters in life, no matter when, where or under what circumstances.

I read the advanced readers' copy after the book was published on September 6, 2016. A copy is  available at Galesburg Public Library.
Posted by Unknown at 7:24 AM No comments:

The Bear and the Nightingale by Katherine Arden 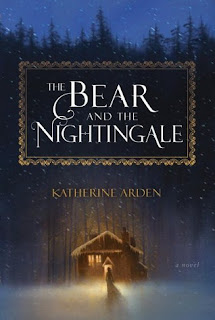 From the publisher: At the edge of the Russian wilderness, winter lasts most of the year and the snowdrifts grow taller than houses. But Vasilisa doesn’t mind—she spends the winter nights huddled around the embers of a fire with her beloved siblings, listening to her nurse’s fairy tales. After Vasilisa’s mother dies, her father brings home a new wife. Fiercely devout, she forbids her family from honoring the household spirits. The family acquiesces, but Vasilisa is frightened, sensing that more hinges upon their rituals than anyone knows. As danger circles nearer, Vasilisa must defy even the people she loves in order to protect her family from a threat that seems to have stepped from her nurse’s most frightening tales.

The Bear and the Nightingale is a lovely and lyrical telling or retelling of a fairy tale. (If this is based on a real fairy tale, I am not familiar with it.) The language is beautiful, although a knowledge of Russian might come in handy as I had some trouble keeping the characters and their many nicknames straight. There is a glossary of Russian words at the back. The book has a gorgeous cover.

This is a very slow moving story; readers looking for lots of action will not find it here.  This is not a book that gallops along. It is a quiet, intriguing tale. I will admit, although I enjoyed The Bear and the Nightingale, I really wanted to love it. I don’t need a lot of action, but I would have liked more character development. The characters did not move beyond being one dimensional fairy tale characters, even though the story is 300 pages long. I did enjoy the descriptions and the variety of the many household spirits Vasilisa sees and honors.

The story does not reflect well on the church and organized religion, but it does have a definite and obvious feminist point to make:

All my life,” [Vasilisa] said, “I have been told ‘go’ and ‘come.’ I am told how I will live, and I am told how I must die. I must be a man’s servant and a mare for his pleasure, or I must hide myself behind walls and surrender my flesh to a cold, silent god. I would walk into the jaws of hell itself, if it were a path of my own choosing. (p. 279)

Some readers may rejoice at this firm and clearly expressed message; I would have preferred something a little more subtle.

If you enjoy novels based on fairy tales and full of beautiful language and imagery, especially those with a strong and spunky female main character, I recommend The Bear and the Nightingale.


I read an advance reader copy of The Bear and the Nightingale. It will be published in January 2017, and the Galesburg Public Library will have the book in print and electronic format.
Posted by Jane (GPL staff) at 12:01 PM No comments:

The Long Way to a Small, Angry Planet by Becky Chambers 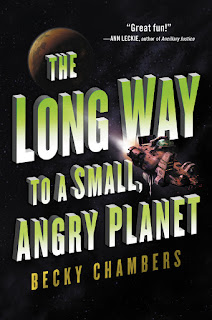 What a delight!  The Long Way to a Small, Angry Planet is a thoroughly enjoyable space opera. A varied crew made up of mostly humans plus individuals from other species live in a patchwork spaceship called the Wayfarer. The crew makes a living by punching tunnels in space for a fee. Each member of the crew is critical to the ship’s livelihood. They are all fairly well developed, though some better than others, and are not uniformly likable. I imagine we’ll see more about each crew member in future books in the series.

This book is episodic, rather than leading to one great conclusion. This serves to build the world and introduce the characters and species. There are varied romantic relationships – between members of the opposite sex of different species, between members of the same sex of different species, between one of the crew and the ship’s AI. The crew includes a human with dwarfism and a member of a species that starts out female and becomes male later in life. This character, Dr. Chef, was my favorite. He is both the doctor and the chef aboard the Wayfarer; his real name in his own language translates to something like “A Grove of Trees Where Friends Meet to Watch the Moons Align During a Sunset in Mid-Autumn," and he is described as being somewhat like an otter crossed with a gecko that walks like a six-legged caterpillar.

Interactions with other species are believable – there are common languages, but not everyone speaks them. Also, humans are not one of the great primary species in this world. After practically destroying Earth, most humans took to space and were fortunate to be rescued from extinction by others. Life in space feels real - for example, some people get physically sick in space.

Although the book is episodic, it also is thought provoking on issues like war and interaction with those who are not like us. The crew members act like a real family, despite their differences. I will definitely read the next book in the series.


The series would make a great TV show. A definite recommend for lovers of (mostly) light-hearted science fiction set in space.

The Galesburg Public Library owns The Long Way to a Small, Angry Planet.
Posted by Jane (GPL staff) at 9:48 AM No comments:

Promote Your Page Too